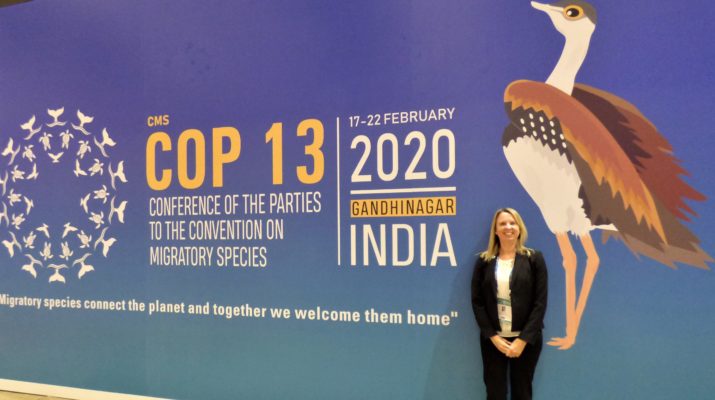 The 13th Conference of Parties to the Convention on Migratory Species convened in Gandhinigar, India. This year a record six proposals were considered to increase and coordinate the conservation of bustard species across Asia! The Government of Mongolia, in coordination with Eurasian Bustard Alliance and Wildlife Science and Conservation Center of Mongolia, submitted a report on the Concerted Action for the Great Bustard in Asia and a proposal to extend activities for the coming triennium. The report was commended by the Scientific Council, and unanimously approved by signatories for extension! After scientific consultation from Dr Mimi Kessler, in her role on the IUCN delegation, signatories voted to accept the proposal by the European Union to list the Little Bustard on Appendices I and II of the Convention, including populations in North Eurasia! In addition, measures were passed to promote the conservation of the Bengal Florican and Great Indian Bustard in South Asia, for which The Corbett Foundation made a statement in support.